Not to be confused with Wonder Boy in Monster Land.

Versions for other platforms were also made. In 1993, Sega released a Master System version of the game specifically for the European market, while in 1994, Hudson Soft remade the game for the TurboDuo under the title of The Dynastic Hero (超英雄伝説ダイナスティックヒーロー Chō Eiyū Densetsu Dainasutikku Hīrō), featuring an all-new theme and cast of characters. In 2007, the Turbo Duo and Mega Drive versions were re-released on the Wii Virtual Console download service.

Wonder Boy in Monster World puts the player in control of Shion in his quest to save Monster World from the evil "BioMeka". It controls like a standard platform game: run, jump, crouch, and kill enemies. The game is filled with adventure elements such as talking to townsfolk, collecting money to buy items, extending the life bar by collecting hearts, and equipping a large variety of armor, weapons and magic.

Shion travels through the many interconnected regions of Monster World, all the while collecting increasingly powerful equipment in the form of many different swords, spears, shields, suits of armor, and boots.

The game introduced a one slot save feature to save progress at inns throughout the game world. In the Japanese original Shion returned to the inn last saved at upon death (and was charged its fee accordingly), so returning to an inn in order to save is a simple matter of allowing Shion to be killed. In the English-language Mega Drive versions this was changed to a "Game Over" screen, but the player will simply reload their last save and restart from an inn, so ultimately this was a very minor change.

The game introduces a new companion mechanic, in every new world, Shion will be accompanied by a small ally he receives from one of the towns. These companions are:

"Monster World was once a peaceful region. Then, the peace was shattered by an invading army of monsters. A young man named Shion vowed to defeat them and make his land peaceful again."

The Sega Master System port is somewhat different. It features re-drawn graphics, fewer and shorter stages, and a complex password system (approximately 40 digits in length) rather than battery-backed save data.

Hudson Soft later released a slightly re-branded version for the Turbo Duo titled The Dynastic Hero. It features palette-swapped visuals, new insect-themed graphics for main characters (and insects' natural predators as bosses), a Red Book audio soundtrack which is completely different from the Wonder Boy original, and anime-style cutscenes at the intro and ending. Shion was renamed Dyna and was modeled after a Hercules Beetle, and the final boss was changed to a giant lizard king. An English-language version was also produced, but both were built off of the Japanese version of Wonder Boy in Monster World so they feature the same difficulty and mechanics as the Japanese version. This particular version was released on Nintendo's Virtual Console service in Europe on November 30, 2007 and in North America on December 3, 2007.

Tec Toy, Sega's distributor in Brazil, altered the Mega Drive version and released it as Turma da Mônica na Terra Dos Monstros (lit.: Monica's Gang in the Land of Monsters). Like other Wonder Boy-to-Monica conversions, the game is in Portuguese, the main character is Monica from the Monica's Gang comics, and other elements and characters from it were added.

Electronic Gaming Monthly gave the Turbo Duo version an 7.2 out of 10, praising the music, graphics, and vast size of the game. GamePro were less impressed, remarking that the characters "have that doe-eyed look reminiscent of the best motel art" and that figuring out how to use some of the items is difficult. They did praise the game's emphasis on action over dialogue and travel, but concluded, "Still, it appears that the designers didn't work too hard to inject much freshness, like a more intriguing story line or more realistic graphics. That's what makes Dynastic Hero a 'run of the mill' rather than a 'better' RPG." 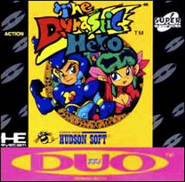 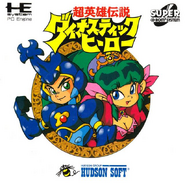