Not to be confused with Wonder Boy in Monster World.

Wonder Boy in Monster Land, also known as Wonder Boy: Monster Land (ワンダーボーイ モンスターランド Wandā Bōi Monsutā Rando) and Super Wonder Boy: Monster World (スーパーワンダーボーイ モンスターワールド), is an action role-playing platform video game developed by Westone Bit Entertainment and published by Sega for arcade cabinets in 1987 and for the Master System in 1988, with a number of other home computer and console ports following. The game is the sequel to the 1986 game Wonder Boy and the first in the Monster World series.

Wonder Land is a vast land blessed with beautiful forests and oceans where the habitants live happily. However, misery suddenly strikes when many monsters led by an evil dragon invade and conquer the land. The peaceful land was now known as "Monster Land", and the humans live always frightened and in hiding. "I can not stand it any longer. I'm going to defeat the dragon and return back our peaceful life again!" The valiant and young "Book the Hero" decided to go on a journey to finish the dragon.

The manual from the American and European Master System versions have a slightly different story from other releases:

After the young Bocke Lee Temjin (nicknamed Tom-Tom by his friends) defeated the evil King in Wonder Boy, peace returned to the kingdom of Wonder Land and Tom-Tom had the honor of receiving the legendary title of Wonder Boy. However, eleven years later, the peace was broken when a ferocious fire breathing dragon appeared and took over Wonder Land with his army of evil monsters. Not knowing how to fight, the people were quickly taken and the serene kingdom of Wonder Land was turned into the devilish "Monster Land". The people could do nothing but call for Wonder Boy, now a teenager, to destroy the monsters and the dragon.

Unlike the first Wonder Boy, Wonder Boy in Monster Land is an action RPG were the player controls Book to fights against the invading monsters. The game's object is to reach the dragon's castle to defeat the dragon leading the monsters and restore peace to the land. Each round has a time limit, and when the time ends the player loses one heart and the timer resets.

The arcade version has 11 rounds, and the Master System version 12 rounds. 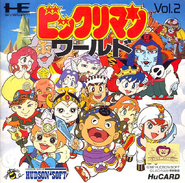