Wonder Boy (ワンダーボーイ Wandā Bōi) is a 1986 platformer video game published by Sega and developed by Escape (later Westone Bit Entertainment). It is the first game in the Wonder Boy series

Originally designed for arcades, it was later ported to the SG-1000, Sega Mark III/Master System and Game Gear video game consoles by Sega, and to the ZX Spectrum, Commodore 64 and Amstrad CPC home computers by Activision. The game is also known as Super Wonder Boy (スーパーワンダーボーイ Sūpā Wandā Bōi) for its Sega Mark III release in Japan and Revenge of Drancon for its Game Gear release in North America. It was also adapted as Adventure Island for the NES, MSX, and other systems.

The mischievous young Boy (Tom-Tom in the Master System version) goes out in a long adventure to chase King (Drancon in the Game Gear version), who had kidnapped his girlfriend Tina (Tanya in the Master System version). The player must guide the "Wonder Boy" through a variety of areas while avoiding enemies. By breaking eggs, Boy can obtain items to help in his, like a stone axe that can be throw at enemies, a skateboard that makes him move faster and withstand one attack, and temporary invincibility. However, eggs with red spots contain negative items.

Wonder Boy's vitality will slowly drop, so the player must get food to keep him healthy while running through the areas. Every four rounds, King appears to challenge Boy.

A remake titled Wonder Boy Returns was released on October 10, 2016. 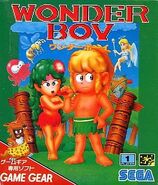