Tina (ティナ), known as Tanya in the Master System version, is a character from Wonder Boy that was captured by King. She is Boy's girlfriend and Pina's sister.

In the first Adventure Island, Tina was renamed Princess Leilani. Later games would call her either Tina or Jeannie Jungle to differentiate her from the original character. 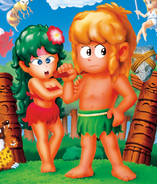 Boy and Tina
Community content is available under CC-BY-SA unless otherwise noted.
Advertisement