Skeleton (スケルトン) is an undead enemy from the Monster World series.

Skeleton is an enemy that only appears in the arcade version. It has two versions, the red Skeleton and the stronger blue Undead Fighter. They appear in Rounds 3, 6, 10 and 11.

Skeleton appears in two versions: Skeleton and Master Skeleton. When damaged, their heads may go out of the body, the head becoming Skull or Master Skull while the body becomes Wandering Bone (mistranslated as "Wondering Born" in the game's ending).

Super Skeleton (スーパースケルトン) is an enemy that attacks.

A skeleton appears as an enemy in the ghost ship and graveyard.

Master Skeleton alongside other enemies from Wonder Boy III: The Dragon's Trap 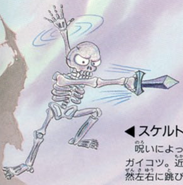