This game features the same gameplay style from the previous titles unchanged, with seven new islands for the player to explore.

The Peaceful kingdom of Adventure Island is in an uproar. What's going on? Today is the day that Master Higgins weds Tina, the new "Miss Island". Everyone is gathered at the church to celebrate their wedding when the evil Baron Bronski appears. For years he has secretly yearned to marry Tina himself, and now he's furious. He barges in and carries Tina off to his domain, along with six children from the wedding. He hides the children on six islands occupied by his underlings and takes Tina to his own personal island, where he plans to hold his own wedding ceremony and make her his wife.

But now it's Master Higgins who is mad. "Bronski will never get away with this!", he growls. He vows to rescue Tina. But before he can reach Bronski's own island, he must first rescue the children on the other six islands. And, naturally, every island is filled with obstacles to hinder his quest. Will he be able to rescue the children and save Tina before she's forced to marry the evil Bronski? You are Master Higgins and Tina's fate is up to you. 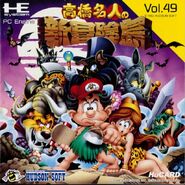