Myconid (マイコニッド Maikoniddo), also known as Malkonid, is a recurring enemy from the Monster World series, a mushroom-like monster.

Myconid is a weak enemy that walks around and is defeated in a single hit. Each is worth 200 points.

Myconid Master (マイコニッド・マスター), also known as Master Myconid and Obake Kinoko (おばけキノコ, "Monster Mushroom"), is the boss of Round 2, a large Myconid that jumps around and unleashes several Myconids. It is worth 2000 points.

Myconids appear as enemies. The tenth boss, Mashalot, is a giant Myconid with a slot in the head.

Enemy Myconids appear in two sizes, and a large Myconid is the first boss.

Myconid is a weak enemy that appears only in a few areas outside of Estafan Village and in the Underground Fort. They jump around and release three spores from their heads.

The mushrooms reappear as enemies that walk back and forth. Blue versions can also release a poisonous gas. There is also one golden version in the Green Fields that drops coins.

A large version, named King Mushroom, is the second boss. 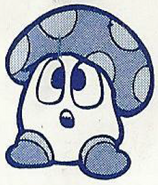