Meka Dragon is the leader of the monsters and the final boss. At first it appears to be a normal dragon, but after Book defeats it, it is revealed to be a robot from outer space. It attacks by releasing powerful flames from its mouth.

The game starts at the end of Wonder Boy in Monster Land, with Meka Dragon being the first boss. After its defeat, it casts a curse on Book that transforms him into a Lizard-Man.

Meka Dragon appears as a secret boss, the battle being identical to Wonder Boy III: The Dragon's Trap. Defeating the dragon grants Jin one Life Heart. 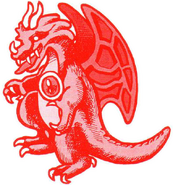 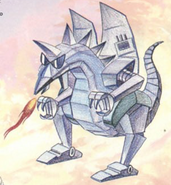