Goblin (ゴブリン Goburin) is an enemy from the Monster World series.

Orc (オーク, named Goblet in the Master System manual) and Goblin are enemies that attack by firing arrows. Each is worth 300 points. They have the same appearance and movement, except that Orc has red skin and is weaker, while Goblin has blue skin and is stronger.

Hob Goblin (ホブ・ゴブリン Hobu Goburin, also written as ホブゴブリン Hobugoburin), named Mega-Goblin in the Master System manual, is the boss of Round 8 (9 in SMS version), a big goblin that attacks with beams. He is worth 4000 points. In the arcade version it also appears as an enemy in the final round.

Goblin is an enemy with a bow. 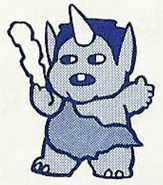 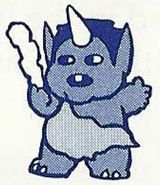