Book (ブック Bukku), also known as Bocke Lee Temjin and Wonder Boy, is the protagonist from Wonder Boy in Monster Land and Wonder Boy III: The Dragon's Trap, and the first playable character to appear in more than one game from the series.

Book is a young habitant of Monster Land that wanted to return peace to the land, so he set out to finish the dragon leading the monsters. After a long journey, he reaches the monster's castle and defeats the dragon, but unbeknownst to him, the dragon was actually a robot from space. Despite its power, Book manages to defeat it thanks to the legendary equipment he obtained.

In Wonder Boy III: The Dragon's Trap, the Meka Dragon is shown to have the power to invoke curses on his enemies and turns Book into a Lizard-Man. After escaping the collapsing castle, Book tries to undo the curse by journeying across the land to obtain the Salamander Cross, which is said to be able to lift his curse. After defeating other dragons, Book finally obtains the Salamander Cross from the Vampire Dragon, returning to normal.

In Wonder Boy III: Monster Lair, Book appears to be the final boss, being above the dragon High Baroom and attacking with the Hurricane spell from the previous games. After the dragon's defeat, it is revealed that he isn't the real Book, but an alien that got the legendary equipment that Book used to defeat the dragon.

In Monster Boy and the Cursed Kingdom, Book, alongside Boy and Shion, is one of the three spirits from past heroes that appears to assist Jin. He can also be seen in a stained glass alongside Boy, Shion, and Asha.

In Wonder Boy III: The Dragon's Trap / Dragon's Curse, Book has six different forms. Except for the Hu-Man form, Book can change between his obtained forms in special rooms found around the land. With the Tasmanian Sword / Kashmir Sword equipped, he can transform into any form (including Hu-Man) in any place by using a command. In the Game Gear and 2017 versions, hold the Up and Attack buttons while falling and the user will change after landing. In the Master System version, hold Button 2 on controller 1 and Button 1 on controller 2 while falling.

In Bikkuriman World, Book is replaced by Head Rokoko (ヘッドロココ), and Super Zeus gives him the task to defeat the evil Jura.

In Mônica no Castelo do Dragão, Book is replaced by the Monica's Gang character Monica (Mônica), and his sword becomes her blue plushie rabbit Samson. In the story, the Monica's Gang villain Captain Fray (Capitão Feio) plans to pollute the world, having many monsters to assist him, including a powerful dragon. Defeat results in Monica becoming one of Captain Fray's monsters.

The Brazilian game Turma da Mônica em O Resgate starts where Mônica no Castelo do Dragão ended. After many battles, the tired Monica is captured by Captain Fray after her battle against the dragon. To rescue her, the scientist Franklin (Franjinha) creates a teleporter to send her friends to Monster Land, but it can send only one person at a time. Book's transformations are replaced by Monica's friends: 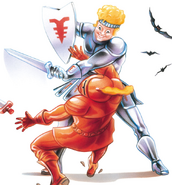 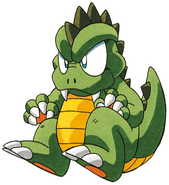 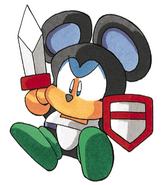 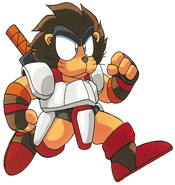 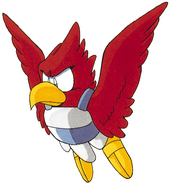